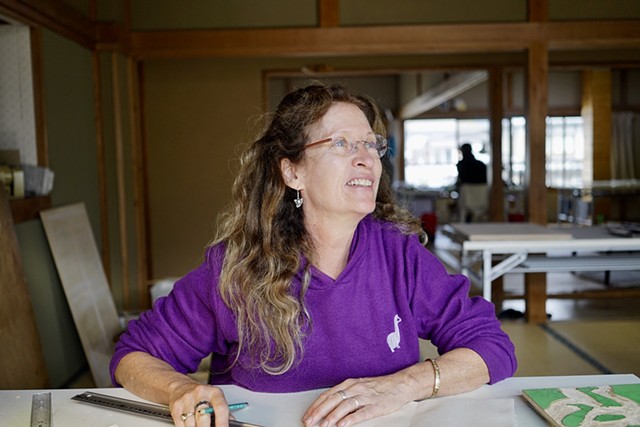 I first encountered thangka painting in the early 70’s in New York City while sitting in the Oriental antique store of a meditation teacher named Rudi. While I drew his portrait, he talked about the beauty of Tibetan scroll paintings, traditionally called thangkas. He spoke with sadness about the destruction of Tibet by the Chinese Communists. As he spoke, I felt a stirring, an awakening in my consciousness. I knew that somehow thangkas were very important to me and I felt a responsibility to help save this art form. I also felt a deep ache in my heart over the potential loss of the amazing culture and people reflected in their arts.

I have had a varied and interesting life this time around. I was born into an Irish-Catholic family. I was the second of nine children, all of us about one year apart. My father was the director of two zoos in the Boston area and my family lived on the grounds of the smaller, Stoneham Zoo, now named after my father, the Stone Zoo. Growing up with the animals made for an enchanted childhood. Unfortunately, my father died in a car accident and I became an adult at age thirteen. My brothers and sisters were not fond of my cooking, but I got better.

My father’s death left me heartbroken and confused. I questioned my religious upbringing and started looking for a deeper meaning of life. This search led me to meet my first teacher, Swami Rudrananda, often called Rudi, at age sixteen. I moved into his ashram in Boston after I graduated from high school and have been living in an ashram ever since.

At the time I was a young art student. My love of art was immense, but I often struggled with deciding on a subject to paint. Years later in Boulder, Colorado, I saw an offering for a class in thangka painting at Naropa University. I knew that I had found my art. I felt that I was born to paint Buddhas and Bodhisattvas. It was a profound realization.

I have a traditional art background. I majored in painting at Montserrat College of Art in Massachusetts and studied figure painting with renowned painter, Irene McCray, at Rocky Mountain College of Art, in Denver. Additionally, I have studied Japanese woodblock printmaking, mokuhanga, with master artist and printmaker, Hiroki Morinoue, in Hawaii.

I began my thangka painting studies in 1987 with three years under Sanje Elliot at Naropa University. Since then, I painted under the guidance of several Tibetan Lamas including HH the Drikung Chetsang Rinpoche and have painted for and received guidance from Khenpo Tsewang Dongyal and his brother, Khenchen Palden Sherab Rinpoche. I have been painting thangkas and drawing Buddhas for over thirty years.

One of the highlights of my thangka painting experience was painting a two-armed Vajrakilaya for the Khenpo brothers. This is a rare form of Vajrakilaya from a hidden text that their father had discovered. They guided me with every step of the painting and iconography. The Khenpos’ students then took photographs of my painting to Nepal and had Nepalese thankga painters reproduce it as is customary with the tradition – we all share drawings. I was happy to see my drawing and painting return to the source from where it came. I have enjoyed the generous acceptance of my Tibetan teachers and have painted personal thangkas for them as well as doing illustrations for a number of books.

My dharma practice is rooted in Kashmir Shaivism, which incorporates both Buddhism and Hinduism. I have had the great good fortune to meet and receive teachings from many highly evolved Yogis, Yoginis, Siddhas, and Buddhist Lamas. I have the utmost respect and reverence for His Holiness the Dalai Lama. I am most grateful for the many teachers who have been so kind to me. Lastly, I am so fortunate to be married to a wonderful yogi husband, Baba Shambhavananda, who is my teacher, best friend and has always been my biggest supporter.

For the past five years, I have been researching thangka woodblocks, which is the technique of carving a Buddha woodblock. This is now my primary discipline. Buddha woodblocks are a dying art. My dream is to preserve and revitalize the tradition. I believe the real joy of carving and painting Buddhas is in creating the space and environment for the deity to reside. The idea is that once the artwork is completed, the deity moves in. The artwork no longer belongs to the artist. It is the home of a Buddha. What an incredible and wonderful thing to do – help manifest Buddhas.